Given that the U.K. is widely touted as the country with the most number of CCTV cameras per head of population (surely, we’ve been overtaken by China?) it’s interesting to compare with other countries…:

A new joint study by the Electronic Frontier Foundation (EFF) and the University of Nevada is attempting to create a transparent inventory of the United States’ growing surveillance apparatus. The project will first inventory surveillance technology being implemented across the southern border, before cataloging similar efforts nationwide.

Throughout 2019, students at the University of Nevada’s Reno’s Reynolds School of Journalism dug through news articles, research reports, press releases, and other public records to compile a set of more than 225 data points showcasing the wide variety of surveillance tech being deployed across the 23 border-facing counties in California, Arizona, New Mexico, and Texas.

The Atlas of Surveillance project found 36 different local government agencies that are now using automated license plate readers (ALPR), 45 states that had outfitted officers with body-worn cameras, and 20 that had implemented flying drones.

Cell-site simulators, smart street lights, and mobile biometric technology are also increasingly utilized. Deployment of these technologies can be explored via the project’s surveillance map. 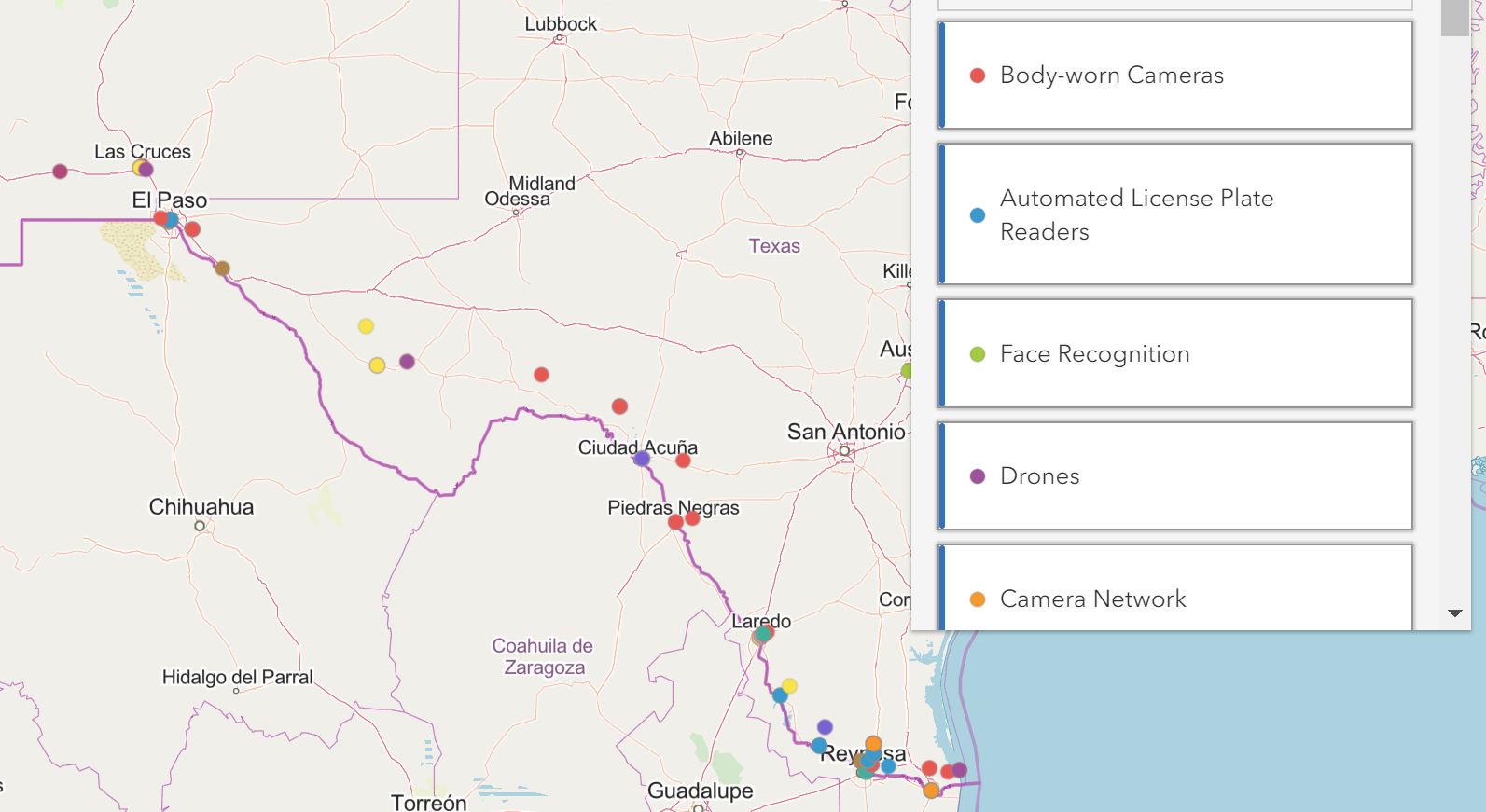 Many of these border regions struggle with fundamentals like quality healthcare and decent broadband, yet have had far fewer problems securing access to a wide variety of surveillance tech including sophisticated sensor towers, blimps, and facial-recognition systems.

The EFF is quick to note that this flood of surveillance tech, once deployed, is routinely utilized well beyond the originally intended scope of border security.

“We found that governments are acquiring this technology without considering the threat to our civil liberties or what steps they can do to mitigate those risks,” he said. “The information we gathered also indicates that surveillance is big business, and that decisions about surveillance may be the result of sales pitches rather than the communities’ needs.”

Maass told me that the project began after the EFF realized there were plenty of news stories, meeting minutes, and FOIA documents available that could help document the purchase and installation of surveillance tech, it just needed to be aggregated and publicized. But actual data on what the government does with this data is another matter entirely.

and almost no information at all about when the technology has been abused,” he said.

Simply having a straightforward guide detailing where the technology exists should go a long way toward that goal. As such, the Atlas project offers a detailed look at the surveillance tech being deployed everywhere from El Paso County, Texas, to San Diego County, California.

According to the EFF, the group is working on expanding the project to inventory police surveillance across the country, using crowdsourcing to collect news articles and public records, then aggregating these existing surveillance datasets for easy public access.

The goal, Maas said, is to provide US residents with an easily accessible field guide to the surveillance technologies that law enforcement agencies have placed in their communities. The expanded effort will also be taking a closer look at the use of real time crime centers, the data being collected there, and how exactly that data is being used.